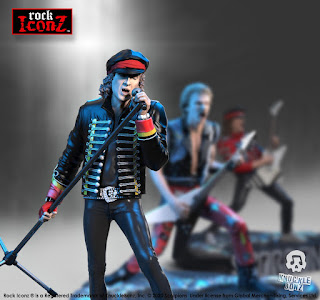 Scorpions were founded in Hannover Germany in 1965 by Rudolf Schenker. From the outset, the band has laid down hard rock and heavy metal that has excited fans across the planet. The soaring vocals of Klaus Meine along with the dual guitar attack of Rudolf Schenker and Matthias Jabs has been the engine driving classic albums such as “Lovedrive, Blackout, Love at First Sting” and many others. Perhaps no other band in rock history has been able to master hard driving riffs alongside power ballads. In 1988, Scorpions were the first band major rock band to play in the Soviet Union with (10) SOLD OUT shows. The following year, they headlined the Moscow Music Peace Festival which was the inspiration for this statue design. Scorpions have influenced countless contemporary bands and to this day remain a stadium and festival headliner. Scorpions celebrated their 50th anniversary in 2015, and there is no end in site with new tour dates to come. See you on the road…

The Rock Iconz® Series celebrates the world’s greatest music performers in a limited-edition collector series. Rock Iconz are hand cast and detailed with a numbered certificate of authenticity. Never more than 3000 is created for super-fans around the world. Rock Hard!

Posted by KnuckleBonz at 11:09 AM No comments:

What Role Does Ghost Papa Nihil Have to Play? 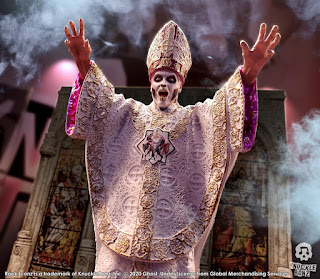 With the bloodline of Papa Emeritus at an end, Papa Nihl tapped Cardinal Copia to lead the band through a tumultuous time for the GHOST faithful. Many thought Cardinal Copia would earn the right to ascend and perhaps become the new Papa Emeritus. He has so such promise. However, Those hopes for fans of the Cardinal were dashed in Mexico City on March 3rd, 2020 with the coronation of Papa IV.

During a time of pandemic and global strife. What part does Papa Nihil have to play? Stay tuned as KnuckleBonz creates new Rock Iconz® collectible statues. Papa Nihil and the Nameless Ghoul Guitarists Rock Iconz statues are now in production. Also coming to Ghost fans worldwide is a new “On Tour” limited edition statue of the “The Ultimate Tour Named Death” stage backdrop.

Each KnuckleBonz Limited Edition  is hand-crafted. Only 3000 pieces created. All Rock Iconz statues are officially licensed, limited edition collectibles. This is a fine-arts production process where each statue is hand-cast, painted and numbered. Rock Iconz are created in 1/9 scale make each 8 to 9 inches tall. Each statue comes with a certificate of authenticity on the base of the statue. Check the work out at www.knucklebonz.com

Posted by KnuckleBonz at 11:29 AM No comments: 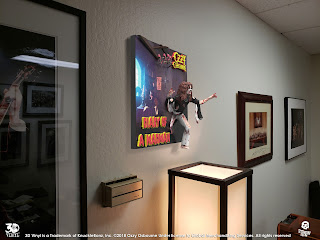 The 3D Vinyl® Collectible Series from KnuckleBonz was created for the Super-Fan that just may not be into the statue and figure category we have created over the past 17 years. 3D Vinyl brings the great album art to life in 3D that can be both wall-mounted or desktop mounted.  Wall mounting was a big addition as we heard from fans, “this work is great, but I don’t have a good place to display it.” Wall mounting to the rescue…

Not every great album makes a great subject for a 3D Vinyl limited edition, but hard rock and metal fans around the world agree Ozzy Osbourne’s 2nd studio album " Diary of a Madman ", the last with the great Randy Rhoads, is a perfect subject. Ozzy’s figure reaches toward you in the crazed-gaze from this 1981 photo shoot.  The candle chandelier and wooden ceiling beams round out the 3D sculpture.

Check out all the great KnuckleBonz 3D Vinyl and Rock Iconz Limited Edition Collectibles at www.knucklebonz.com

Posted by KnuckleBonz at 11:09 AM No comments: 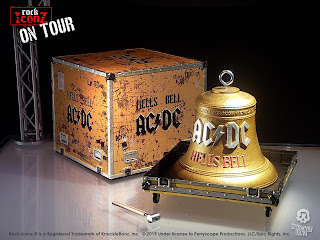 The AC/DC “Hell’s Bell” first graced the AC/DC live stage in support of the “Back in Black” world tour in 1980. This was the band’s 7th studio album and the 1st with new frontman Brian Johnson. For anyone associated with that tour, it quickly became clear that this was not just another stage prop. It was, in fact, a 1300kgs bronze colossus that actually smashed through many concert stages during load-in as it was wheeled into position in the custom road case. This bell was special, as it was not only an amazing sight during live performances, but it was the very same that was rang out (13) times on the “Hells Bell” track on the album.

“HELLS BELL ACROSS THE SKY”

The new Rock Iconz® “On Tour” Series brings music fans and collectors moments in and around the world’s great live performances and world tours. Each On Tour collectible is hand detailed and is an officially licensed limited edition.

Posted by KnuckleBonz at 10:52 AM No comments: 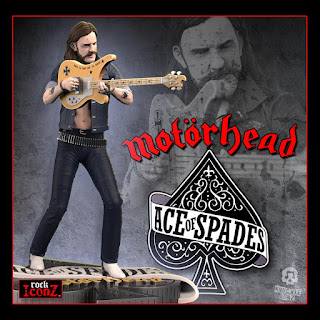 Lemmy Kilmister began his musical career in the early ‘60s  before finding fame with the pioneering space rock legends Hawkwind. After departing in 1975, Lemmy formed Motörhead and would go on to create a non-stop 40+ year barrage of the loudest music in the world. This would combine his love for the roots of rock ‘n’ roll and heroes like Chuck Berry and Little Richard, with an innovative quality that would spawn a new level of speed and aggression. A straightforward, no-nonsense style of bass playing and song writing found favor with both rockers, and the emerging punk scene of the late 70s. This new, raw prototype sound was the progenitor of modern heavy metal. Lemmy, and, Motörhead had triumphantly forged new ground and laid the foundation that speed/thrash metal would follow. What magnificent bastards, eh?!!!
KnuckleBonz 3rd Rock Iconz® Limited Edition Collectible Statue captures Lemmy from this “Ace of Spades” era of the band. The pose has Lemmy gunning down the audience at the end of the Motorhead set…a classic moment of any Lemmy performance. Rock Hard! Kbonz

Posted by KnuckleBonz at 10:43 AM No comments: 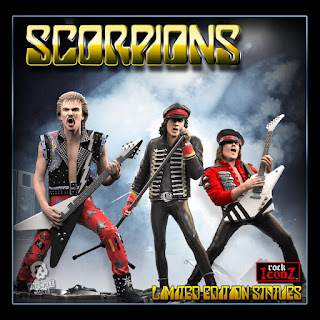 There were many hard rock and music festivals in the 80s and 90s, but none quite so unique as event that spanned August 12th and 13th 1989. The Soviet Union was thawing, but still behind the red curtain. None had any sense of the change was queued up.  Nobody that played or attended this festival could imagine the Berlin Wall would come down just 2 years later.

Organized by Doc McGee’s “Make A Difference” foundation to promote world peace and establish international cooperation in fighting the drug war in Russia, a top tier lineup of hard rock and metal acts would assemble at Central Lenin Stadium in Moscow. Some would question the motivations for staging this event, but it was none the less, it was the 1st major rock festival in the USSR. A true moment in music history.

Rock Iconz Ozzy Osbourne, Motley Crue and the Scorpions where the established hard rock and metal veterans on the bill and would be joined by newcomers Cinderella and Skid Row. Egos and controversy were ignited when the more pop centric Bon Jovi was also on the bill and was perceived to receive preference from manager Doc McGhee. Bon Jovi got the closing slot and allowed a longer set and a more elaborate stage production. In “The Dirt”, Crue members Nikki Sixx and Tommy Lee reported that McGhee was made to pay a physical price for this slight as well as being fired at the end of the festival.

Perhaps only the Scorpions who has played 10 SOLD OUT shows in Moscow the year prior had any clue of what life is Russia was like at that time. While the west hailed Gorbachov, the typical Russian citizen had a hard time coming by basic necessities in this era. The bands openly talked about trying to find anything to eat during their trip to the festival.  Luckily, the music won out and all the groups put their egos and stomachs aside to deliver top level performances that where broadcast globally by MTV. Yes, they were still playing music on MTV then…sigh.

KnuckleBonz chose this era of the Scorpions as the basis for their new Rock Iconz® Collectible Statues. The Scorps were at the height of their power and perhaps the only band on the bill that could have filled a stadium on any continent in the late 80s. These new limited-edition collectible statues are currently in production and are slated to ship in late fall 2020. They will be joined by a 3D Vinyl® version of the classic “Blackout” album as well a collectible Road Case from the Rock Iconz “On Tour” Series. See all the information on this and other KnuckleBonz Rock Iconz at www.knucklebonz.com

Posted by KnuckleBonz at 3:24 PM No comments:

2018 will be another behemoth year for KnuckleBonz with even more new products to be announced.  Along with these new additions to our Rock Iconz™ series, there will be a price increase, our first in almost a decade. This is needed to allow us to continue to deliver the same great official licenses from top bands and artists, statue quality, and level of detail we have been creating since our founding in 2003. On March 20th, all shipping Rock Iconz as well as any Pre-Order statues will increase to $149.

Take this time to lock in at our current $125 price and add any Rock Iconz that are missing from your collection.

KnuckleBonz products are all hand-crafted. They are now (and will always be) created in very limited editions. It’s a way for super passionate fans and collectors to connect with our music past and present. We do our best to create value for our customers, yet still have a product that is accessible to all. That said, we know our work is not for everyone and is not meant to be. A Rock Iconz Limited Edition is an investment; a factor that we take very seriously. Each limited edition brings together never more than 3000 people worldwide as part of the brotherhood and sisterhood who honors the great music performers in music.

We are so pleased and privileged to continue the Rock Iconz Series into our 15th year.

Thx and Rock Hard ! Kbonz
Posted by KnuckleBonz at 3:21 PM No comments: